Preparing for the Blast of Artic Air

Ok, last year was a freak of nature.  We had a few nights of below-freezing temps in January.  I remember reading my favorite blog, Hoe and Shovel, which is in the Central part of Florida. My stomach was just turning as I read about the devastation that the cold air had brought her tropical garden.  The freezing temps in our part of the state killed alot of the most sensitive plants.  Plumeria and Christmas Palms were probably hit the hardest.  Most of the Coconut Palms lost their fronds, but eventually survived.

With that said, here we are again with an exact repeat of what happened last year.  A fast moving front barreled in from Canada.  The day after the front brought a strong and constant Northwesterly wind.  If those winds stop tonight, we can count on ice and frost...just like last year.  I mean, look at this forecast.  Could we have any more advisories?!

So, I took a trip over Goodwill and picked up some cheap linens to try to save as many plants as possible.  Although, I did not have anything big enough to cover the Philodendron to the left, I think it will only loose some fronds and ultimately survive. 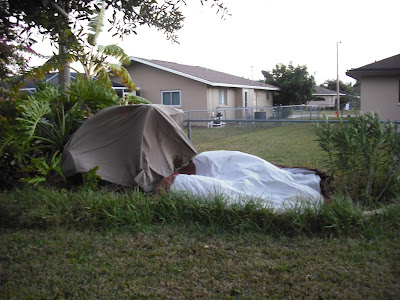 I also covered up my little plants in the front yard.  My front yard faces north, so it will most likely be the coldest.  All those blue buckets from the old recycling company sure come in handy! 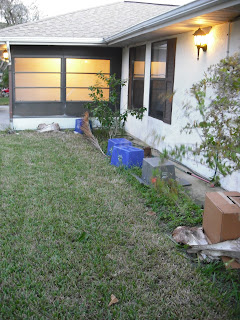 I even used some palm frond husks that the wind blew down today to shelter my Aloe Vera.  This little Caladium has been holding on through the cooler weather.  It can kiss it's butt goodbye tonight. 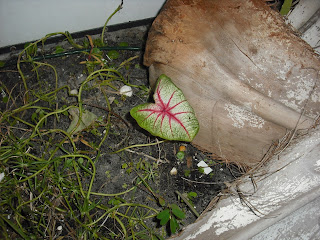 All the potted plants that were too big to bring into my Florida Room I moved into a sheltered corner under the eave of the house. 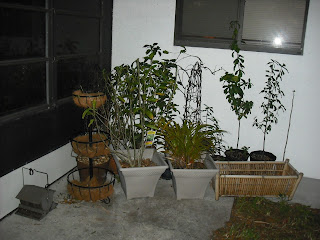 I've prepared for the worst, all I can do now is hope for the best.  And bundle myself up.  Let's hope I don't have any disastrous photos to share this weekend.
...
...
In my humble opinion (at the moment):  The two best creations on earth.... 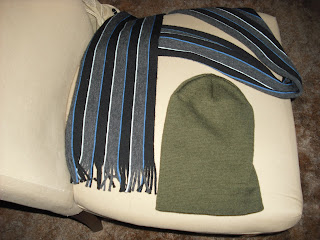